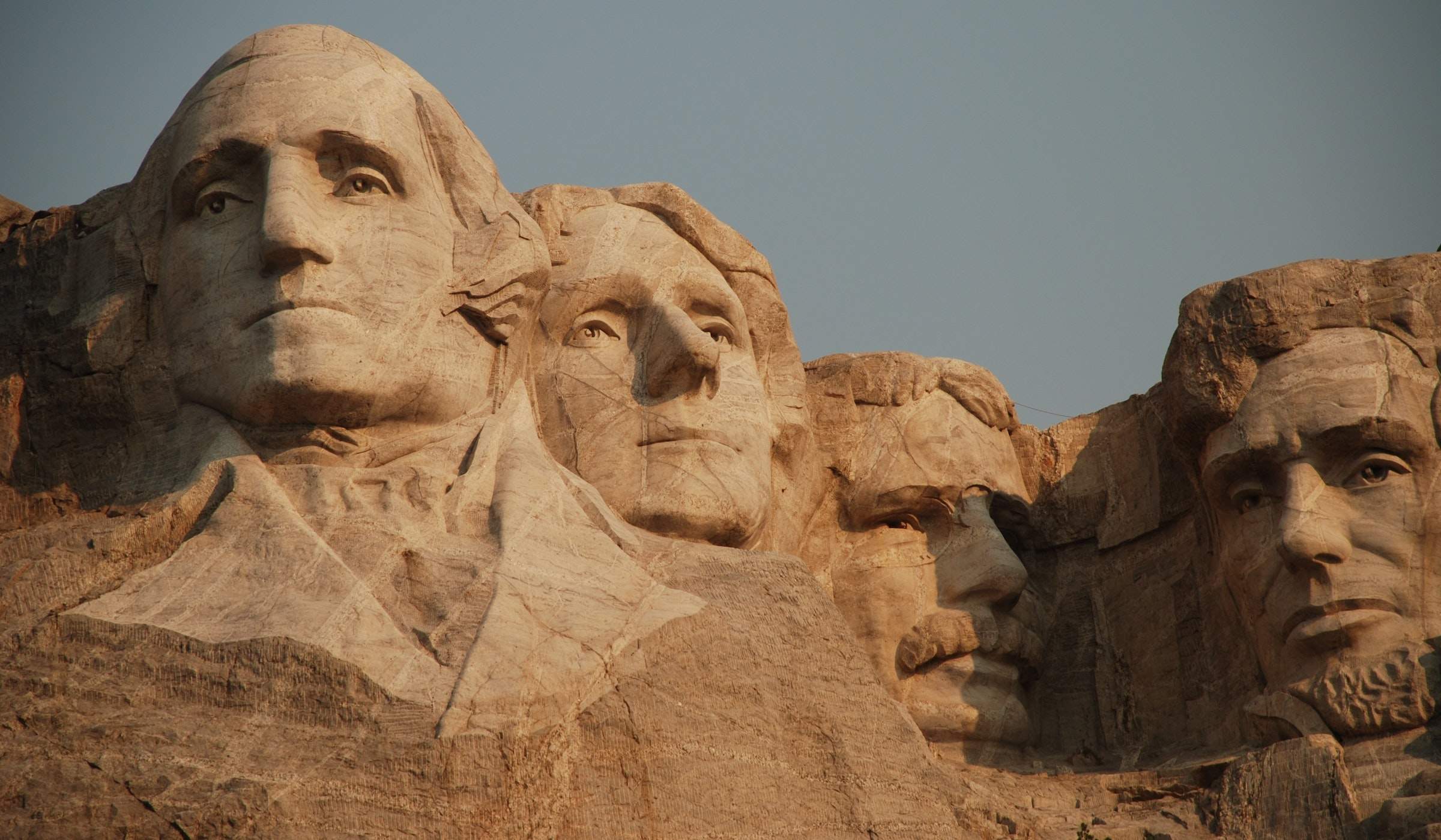 How Do You Outdoorsy?

When we think of U.S. presidents, images of massive D.C. monuments might come to mind. After all, the National Mall and many blocks of Washington are devoted to large structures celebrating these monumental figures.

But RVers like us know there’s more to history than what meets the eye in D.C. While U.S. presidents always end up at The White House, their lives didn’t begin or end there.

Many presidents came from humble beginnings in towns that celebrate their legacy.

Other presidents left behind quirky pieces of history like hidden bunkers to protect from atomic attacks.

And that’s the type of history we want to help you celebrate today. What follows is a list of a few spots we think are rad to check out around this President’s Day.

The Great Depression might’ve led to Hoover’s presidential downfall, but his pre and post-presidential story is a fascinating one.

Born into a simple Iowa home, Herbert’s father was a blacksmith who built the tiny two-bedroom family cabin that still sits at this historic site.

Sadly, both of Herbert’s parents died by the time he was nine years old, leaving him orphaned. But that didn’t stop good ol’ Hoover from graduating from Stanford University, succeeding in business, and becoming a philanthropist who is a hero to this day in Eastern Europe for his famine-fighting efforts there.

You can discover all this and more by paying a visit to the Herbert Hoover Library and Museum just outside Iowa City, IA.

Here are some RVs for rent near Hoover’s birthplace.

Most of us know that Honest Abe was born in a log cabin, but did you know it was a cabin in Kentucky and not Illinois?

President Lincoln spent the first seven years of his life in The Bluegrass State and The Heritage Trail allows you to see a replica of the famous tiny log cabin, a farm along Knob Creek where the Lincolns lived, and The Lincoln Museum.

Here are some nearby RVs for rent so you can turn this trail into a presidential road trip.

This bunker was constructed quickly and with the utmost secrecy during The Cuban Missile Crisis. Far from a luxury underground lair, the bunker is a bare-bones spot that doesn’t even have a bathroom (POTUS was apparently supposed to go in a bucket…).

JFK’s Atomic Bunker is currently closed for renovations, but you can still swing past it if you make your way out to Peanut Island — a popular Palm Beach destination only accessible by boat (kayaks, canoes, and SUPs included).

The bunker is no joke according to its museum website: “The declassified, decommissioned bunker is very close to the original. Entry is via a blast-hardened tunnel, with a 90-degree angle to minimize shock effects from a nuclear explosion. Entry is through a secure decontamination area, which was, however, and interestingly, made of plywood.”

So, if you want some quirky history this Presidents Day, check out a Palm Beach RV rental — preferably one that offers kayaks as an add-on.

When it comes to President’s Day destinations, Mount Rushmore might be an obvious choice. But the nearby town of Rapid City offers its own fun homage to our presidents.

If you take a stroll through downtown, you’ll quickly be greeted by forty-three bronze, life-size statues of the guys who have held the office.

Each bronze statue was privately funded and the pattern of statue placement was ordered to eliminate any sense of favoritism or political gain. Jump off the beaten path for a fun and historic walking president’s tour in downtown Rapid City.

Here are some nearby RVs for rent.

While modern presidential turkey pardons began in 1989, Jack was the first gobbler to be spared with the stroke of a president’s pen.

As the story goes, Honest Abe’s son Tad took quite a liking to a holiday turkey that was gifted to the Lincoln family. Ever the doting father, President Lincoln responded to Tad’s pleas to spare Jack’s life with a note giving the turkey an official ‘pardon’.

Some enterprising Connecticuters decided it would be grand to erect a statue to this famous turkey — and erect it they did.

Next time you’re near Hartford, rent a rig for New England exploration and be sure to visit Jack as you roll.

We just happen to think this 13-foot-tall smiling peanut is a fun and funny roadside stop in Southern Georgia. The peanut was built to pay homage to Jimmy Carter and his famous toothy smile.

The peanut was built in Evansville, Indiana in 1976 for the city’s September Democrat Dinner, where President Carter was a guest of honor. Secret service agents even cut a hole in the peanut’s back to ensure there wasn’t a bomb or assassin hiding within!

The peanut stood the test of time and eventually made its way closer to home. Check it out when you rent an Atlanta RV and roll down to the Gulf.

Ohio is often called the ‘Mother of Presidents’ because seven presidents were born here. This fun road trip will take you to homes, monuments, and museums of such leaders as James A Garfield, William McKinley, and Warren Harding.

Be sure to check out the First Ladies National Historic Site while you’re out there.

RVs for rent in Cleveland or Columbus will put your right on route.

Back in the day, a young Barack Obama lived in Hyde Park and strolled into the Hyde Park Salon for his usual $21 do.

Not one for missed opportunity, the Salon labeled itself ‘The Official Barbershop of President Obama’ and encased Barack’s chair in plexiglass where it stands immortalized for future generations to see.

While this chair alone might not be something to plan a trip around — an RV trip to the Chicago area opens the door to the vast natural beauty of the Great Lakes Region. And, who knows, you might just need a trim while you travel anyway — why not stop at this famous spot to check out the chair and get a cut?

As you’ve probably noticed, we’ve focused on off-the-beaten-path destinations for our presidential itinerary. While this last entry might be a national park, we still say it’s one of the more underrated and under-discovered parks out there.

Nestled in the North Dakota Badlands, this park is the spot that Roosevelt credits with turning him on a presidential path that created the national park system.

Hit this park to learn more about the history of Teddy, watch Bison roam, and enjoy some epic camping along the way.

Here are a few RVs to help you take the trek.

Quirky history is more easily discovered when you take road trips that allow you to stop at the spaces in between. We hope the list above helps you find some fun presidential history as you travel around this President’s Day.

And if you need a rig for the ride, see what we have for rent here.

I dream in TAB Teardrop Trailers

Tips for Towing a Travel Trailer

What you need to know BEFORE purchasing a fifth-wheel RV

Where Can I Park My RV Long Term?

7 RV Remodel Tips That Won’t Break the Bank (or Your Back!)

Pros and Cons of Renting Your RV

Dumb RV Mistakes We Made During Our First Year

Do You Know Why It’s Called A “Fifth Wheel” RV?

The 50 Best Luxury RV Parks in the US

Three Ways to Tow a Car Behind Your RV

Do Small Campers Still Have Bathrooms? These 10 Do.

How to Fill Up Your RV’s Fresh Water Tank

Tree House Rentals in Tennessee: 10 Handpicked Options for You